Last week as Apple released macOS Monterey 12.3 and as customers' systems updated, our security monitoring platform lit up like the proverbial Christmas tree.

To start with we had to dig into what Xprotect Remediator MRT is. It didn't take long to find that Xprotect is Apple's built-in Anti-Virus technology.

Apple updated Xprotect on March 3rd, 2022 to version 2157, introducing rule MACOS.e150543, which prevents variants of the adware FPlayer. The other updates to XProtect come to rule MACOS.1db9cfa and MACOS.6eaea4b. Both rules prevent the XCSSET malware, introduced in version 2142 and 2144 respectively. Both were last updated in version 2149 from June 28, 2021. 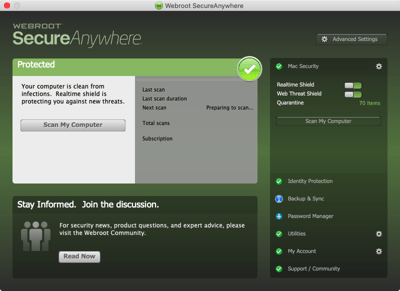 A quick discussion with WebRoot support confirmed this was a False positive and we were advised that a resolution was in the works and would be released shortly.

The Top 10 Mac Apps I can’t live without.

The Apple Mac is certainly a powerful computer but what makes it even more powerful is the quality of applications. Here are top 10 Mac apps!

Do Mac’s get Viruses?

Yes, Apple Macintosh - Mac's computers can and do get Viruses. In fact it’s possible for them to be infected by all sorts of nasties.

macOS Monterey 12.1 update not showing on some M1 Macs

macOS Monterey problem? Is your Mac not showing updates? Can't update macOS Monterey for some reason? We might have the answer to your macOS problems.

Get notified about the latest posts straight to your inbox.

The latest technology together with useful hints, tips and how-tos.